Baarle is a village in the border of two countries, Belgium and Netherlands. This village is divided into two municipalities namely Baarle-Nassau, belonging to North Brabant province in Netherlands and Baarle-Hertog which belongs to province of Antwerp in Belgium. The border which runs in between these municipalities is not curved or straight. Instead the border runs between 22 small pieces of land. 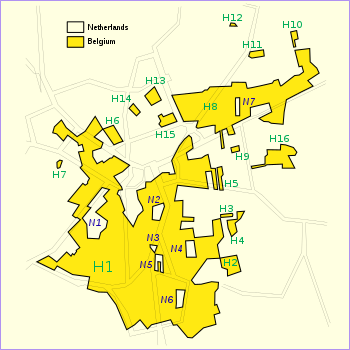 In the above map, H, N together are 22 different regions (enclaves). Within these enclaves we find 6 regions which belong to Netherlands (shown in N) and the rest to Belgium.

The border between these countries has no barriers! It is marked with white crosses on the pavement. Some of the border lines run in between the restaurant, houses and churches. If a child is born in such a house, he /she can have Dutch or Belgian nationality as per their parents choice. The tax system and certain rules are also different in these regions. For instance, as per the rule, if the restaurants in Netherlands closes sooner then people could just change their table to Belgium side, as the restaurants would be open till late night.

I was in two countries at the same time! The location of this cross line is Singel 18, 5111 CD Baarle-Nassau-Grens, just next to a bus stop. The length of the line is at least 5m, in the above mentioned address. So the border is not continuous, you need to search for these crosses.

This is the information centre in Singel, with flags of two countries.

And the restaurant that runs between the border, they serve really good ice cream.

Anyone curious to see the border line can visit the place and enjoy tasty food.